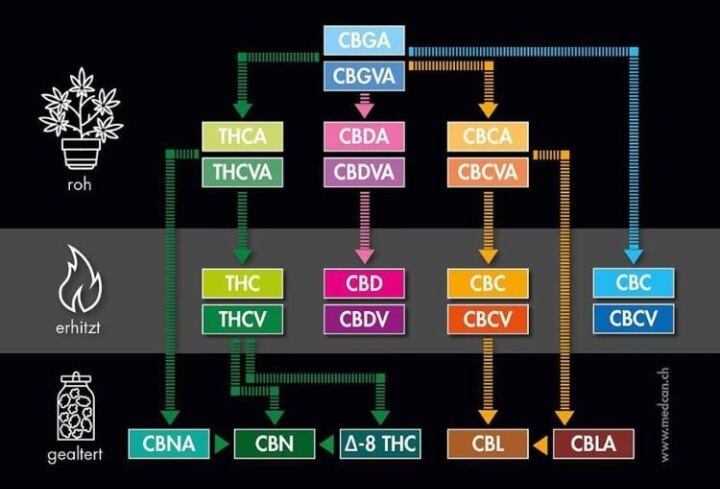 In this article we want to refer to CBG, the root of cannabinoids, its difference with CBD and finally inform you about our CBG research project aimed at developing products to treat lung-related diseases.

CBG is one of the least studied cannabinoids due to its low presence in the cannabis plant (around 1%), it does not have a psychoactive or psychotropic effect. And, in general, it is also non-toxic and has no side effects on our bodies.

CBG is one of more than 100 known cannabinoids. In fact, it is the first one to appear in the plant and, therefore, all other cannabinoids are derived from it. These include THC, CBD, CBC and Cannabinol or CBN.

All cannabinoids present in the cannabis plant are derived from cannabigerolic acid (CBGA), which is the acid form of CBG. As the plant matures, CBGA is converted by enzymes in the plant into three main cannabinoid precursors:

CBD and THC are not found as such in the plant. To convert CBDA and THCA into CBD and THC respectively, we must heat the material so that a chemical process known as decarboxylation occurs, which involves the loss of a CO2 molecule.

As with CBD, CBG is a new revolution in the therapeutic use of cannabis. Moreover, some of its medicinal properties, all of them non-psychoactive, are already known. For example, its anti-inflammatory power and its pain-relieving effects.

Differences between CBG and CBD

Although both substances are cannabinoids, the main difference between them is that they come from different compounds within the cannabis plant. That is, although they are both derived from CBGA, their chemical structures and their concentration in the strains are totally different.

According to the Harvard School of Health, CBG, like CBD, is not a toxic cannabinoid. Compared to the existing scientific literature on CBD, CBG is superior in the following areas: appetite regulation, increased concentration, intestinal disorders and ADHD symptoms.

On the organoleptic differences between CBG and CBD, the CBD flower is more potent and sophisticated, while the CBG flower has a more discreet aroma and looks less showy.

Finally, it is worth mentioning that both CBD and CBG have a neuroprotective effect. However, CBG does this by stimulating the production of proteins called BDNFs, while CBD acts by raising levels of anandamide, a neuroprotectant that modulates CB1 receptors. Therefore, although they are different in many ways, CBD and CBG could be a great combination if consumed together.

How will we achieve this?

In Tenerife, Spain, through our company Erbocanoby, we have a large cultivation of different medicinal plants: plantain, lemon balm, mugwort annua, and moringa.

These plants are pulverized and this powder will be sent to Switzerland to our laboratory where we will make an ethanol extraction, the resulting product is the crude extract, which is then cleaned with a distillate and a clean concentrate will be made from each plant.

The result will be the product that we will use to help lung diseases, high eye pressure problems, breathing problems and can be used in different forms, topical use (creams), in oil format and vaping with the electronic cigarette.

This project is under development, we will soon give you more details on its progress.

CBN and melatonin based sleep oil

CBN is the best cannabinoid for sleep and that is why we have developed a sleep oil designed for people who have problems with insomnia. Many adults experience short-term acute insomnia, lasting a few days or weeks. It is usually due to stress or a traumatic event....
Read More

The cannabis industry is on the rise and within this world there is a diversity of associated concepts, some known and others not so much, among them the Tetrahydrocannabinol or THC, so we have developed this post to answer questions such as THC, what is it, is it...
Read More

Pre-clinical studies in humans and mice suggest that CBD can prevent SARS-CoV-2 replication in the early stages of infection.  This study published in the journal Science Advances reports that CBD showed a significant negative association with positive SARS-CoV-2...
Read More