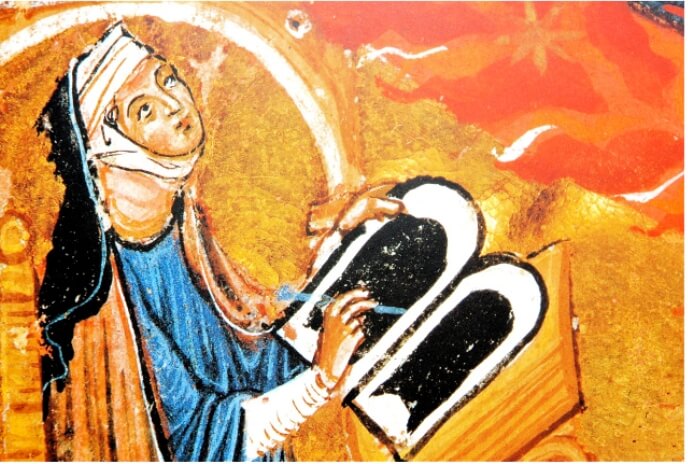 Palaeobotanical studies have found that hemp was cultivated, mainly for fibre, in south-east England from about 400 AD. The Anglo-Saxons migrated to the British Isles and brought cannabis with them around the 5th century.In the 6th century (around 500-570), the Constantinopolitanus, a botanical book in which a drawing of the cannabis plant was included (it is the oldest known book drawing of the plant) and Aetius of Amida, a native of Mesopotamia, also wrote a 16-volume medical encyclopaedia in Constantinople: the Tetrabibloi in which hemp is mentioned (Conrad, 1998:29).

Moving on to historical personalities, we start in the middle of the late Middle Ages with:

St. Hildegard of Bigen was also a writer, composer, and botanist, one of the forerunners of the first publications on medicinal cannabis, arguing that cannabis helps with stomach aches, nausea and headache.

In St. Hildergard’s book entitled “Physica”, she wrote a chapter in which she talked about all the uses and applications she had discovered about cannabis in reference to the healing of some illnesses, the use of its seeds and different tinctures as a pain reliever for different pains. In chapter 11 she herself would write about hemp: ¨Its seeds are healthy and wholesome for people to eat. It is easily absorbed by the body and diminishes bad humours, so that the good ones persist. Its plant also heals ulcers and wounds’.

Historical figures of CBD in Europe

The first evidence of the plant’s use dates back to 12,000 BC in China. William Turner, an English naturalist considered the first botanist, extols its properties in New Herbal, published in 1538.

Moving into Latin America, words for marijuana in Brazil include maconha (of Angolan origin), liama and diamba, very similar linguistically to its African origin. Cannabis was used by the slave population for religious and festive purposes during their short periods of inactivity. In the 18th century, it became a concern for the Portuguese Crown.

Rural Indians and mestizos adopted cannabis use for medicinal and social purposes without attracting the attention of the upper class. Cannabis use moved from Brazil to the Caribbean in the late 19th century.

Leaving Latin America, we focus on W.B. O’Shaughnessy: the 20th century was a period of major expansion of Cannabis in the West; cosmetics, pharmaceuticals and multiple everyday uses for the home made its popularity grow, especially thanks to the contribution of the Scottish military doctor W.B. O’Shaughnessy, who in 1850 made the therapeutic properties of cannabis known on a massive scale in the medical field.

Dr. Raphael Mechoulam, It was in the first half of the 20th century that the plant was discredited, stigmatising its use worldwide. It was not until the 1960s that an Israeli scientist, Dr. Raphael Mechoulam, decided to investigate cannabis, as very little was known in physiological terms, and in 1964 he became the first scientist to identify and synthesise THC, and years later CBD.

A journey through characters whose lives have been influenced by hemp:

Juana de Arco: the French heroine was accused of witchcraft – because she allegedly used various herbs such as cannabis to induce trances.

John F. Kennedy: There is documented evidence that the great JFK fought several health problems with medical marijuana. The former president suffered from severe chronic back pain and Addison’s disease.

William Shakespeare: Scientists found an ancient pipe in Shakespeare’s garden containing traces of cannabis, and another containing cocaine. The greatest poet and playwright in the English language may have used cannabis as an inspiration for his work.

Cristóbal Colón: the man who sailed from Europe to discover America and who brought with him numerous seeds of Sativa plants. These seeds had a very specific purpose: in case of shipwreck, they would have been used for food. As history tells us, Columbus’ voyage was uneventful, so we can assume that Columbus and his sailors found other, more creative uses for the seeds they brought with them.

Bob Marley: Although he is no longer with us, we cannot forget the great Bob Marley, whose contributions to the world of reggae are only matched by his image, recognised all over the world, with a joint in his mouth, as shown on many of the covers of his albums in favour of freedom of consumption.

Barack Obama: We close our selection with the former president of the United States, some biographies of Obama mention his cannabis use. In one of these books, the president is described as “not just a stoner, but an innovative stoner”. Although Obama does not openly encourage the use of weed, he has often stated that he considers it less dangerous than alcohol.

We can conclude that cannabis has influenced the lives of many important figures in history, as a source of medicine, inspiration, or for its relaxing effect. There is still a long way to go, but there are certainly many things to discover and write about the countless benefits of this plant.

For more information on how to apply its uses at wholesale level, please do not hesitate to contact us.

CBN and melatonin based sleep oil

CBN is the best cannabinoid for sleep and that is why we have developed a sleep oil designed for people who have problems with insomnia. Many adults experience short-term acute insomnia, lasting a few days or weeks. It is usually due to stress or a traumatic event....
Read More

In this article we want to refer to CBG, the root of cannabinoids, its difference with CBD and finally inform you about our CBG research project aimed at developing products to treat lung-related diseases. What is CBG? CBG is one of the least studied cannabinoids due...
Read More

Pre-clinical studies in humans and mice suggest that CBD can prevent SARS-CoV-2 replication in the early stages of infection.  This study published in the journal Science Advances reports that CBD showed a significant negative association with positive SARS-CoV-2...
Read More

CBD in Tenerife, Spain tackles pathologies of the lungs

At Blucanoby as CBD wholesalers, we are clear that the natural properties of CBD are used to treat different diseases. As a result of the coronavirus pandemic, we have been affected by multiple pathologies linked to respiratory diseases, which is why we have...
Read More